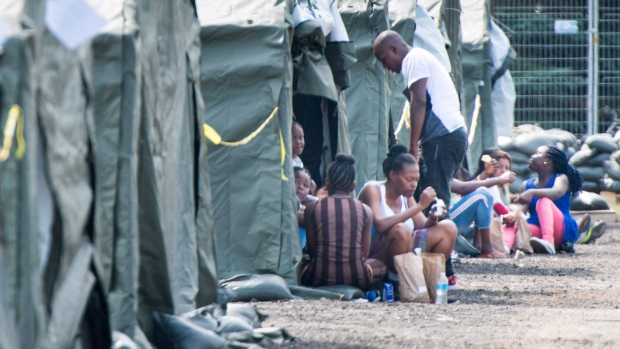 Asylum seekers sit in front of their tent in a temporary camp near Saint-Bernard-de-Lacolle, Que. on Tues., Aug. 15, 2017. (Paul Chiasson / THE CANADIAN PRESS)

OTTAWA — The number of people seeking asylum in Canada is now the highest it’s been since 2009, driven in part by a surge in asylum seekers showing up at the Canada-U.S. border.

New statistics released Tuesday by Immigration, Refugees and Citizenship Canada show that as of August, 27,440 claims for of asylum have been filed in Canada, a peak since record highs of between 36,000 and 33,000 in 2008 and 2009.

And the numbers are expected to continue to rise.

During a briefing Monday with immigration organizations in New York City, Immigration Minister Ahmed Hussen said based on current trends, Canada could see 40,000 claimants by the end of the year, according to Conservative immigration critic Michelle Rempel, who was in the room. Hussen’s office confirmed her account.

“Given the global forced displacement and forced migration, this is now a public policy concern,” Rempel said.

“Nobody is saying that this is going to stop.”

At current levels, the federal and provincial governments are looking at a bill of at least $353.9 million to $548.8 million to process claims and provide the required services — the cost per claim ranges from $12,900 to $20,000, the Immigration Department says.

Those numbers don’t take into account the cost of deporting failed claimants, nor the special measures rolled out to manage the sudden summer spike in border arrivals — it’s too early to know that price tag, the department says.

Those measures were deployed in July and early August as upwards of 200 people were crossing into Quebec from New York state each day. Officials say the number of arrivals have since come back down.

“That’s one of the very obvious lessons that the statistics have demonstrated over the last seven or eight months while the situation has developed at the Canadian border.”

The full scope of the situation over the summer was reflected in the data released Tuesday — the RCMP intercepted 5,530 people crossing illegally into Quebec in August, up from 2,996 in July.

As of August, 13,211 people have been intercepted trying to make a similar journey and while the numbers are highest in Quebec, British Columbia registered a spike of its own last month. There, 102 people were stopped, up from 51 the month before.

A dedicated Immigration and Refugee Board team has been seconded to deal with large groups of arrivals claiming asylum from the same countries. The vast majority in Quebec are of Haitian descent; in Manitoba earlier this year, most were Somalian.

The board has been warning for months, however, that they are ill-equipped to manage the ongoing rise in claims without creating lengthy backlogs, given existing budgets and staffing levels.

A briefing note obtained by The Canadian Press earlier this year said that without system improvements or additional resources, steadily rising numbers of claims would mean wait times of as long as 11 years by the end of 2021.

The head of the IRB said on Twitter Tuesday that the current wait time is 16 months.

Even before the surge, the number of claims being added to the board’s backlog was growing by the month, said NDP immigration critic Jenny Kwan.

The fact the Liberal government did nothing then — and is doing little now beyond calling for greater efficiency at the board — is a serious issue, Kwan said.

“This Liberal government is putting in jeopardy our immigration system.”